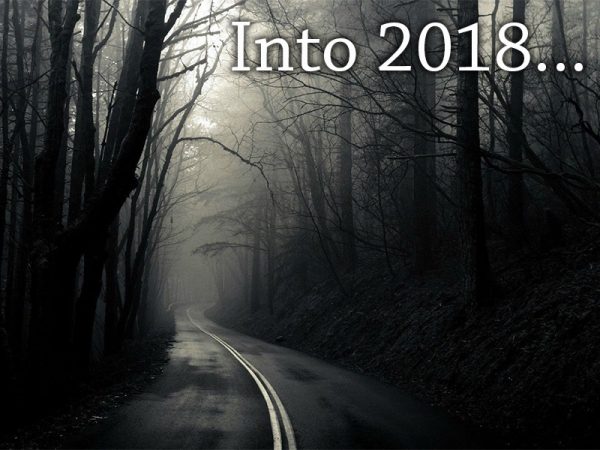 First of all – Happy New Year to you all! I hope 2018 brings you everything you are working towards. And with that in mind, I thought I’d lay down in writing my plans for this coming year, to make sure I stick to them.

I’ve looked back over 2017 – my first year as a Self-Published author. My first book, Horror in the Woods, was released in May of that year, and my second, The Demonic, was released in July. I wrote these back to back and had the first drafts of both ready before the first book was even published, which is why they were put out only two months apart. Since then I’ve not managed to release another book, so the production schedule slowed somewhat. The reason for this was actually a really good one and one I am thankful for – my baby daughter, Ella, came into the lives of my wife and I. Obviously this has put a strain on my writing time as Michelle and I get used to parenthood (to be fair, Michelle is a natural) but I wouldn’t have it any other way. But now we are getting to grips with things I am going to ramp things up in 2018.

I’m happy with how things have gone in 2017 but know they can be massively improved upon. For those interested, my results were:

So, going into 2018, I plan to up my output in all areas. First, the audiobook of The Demonic will be released in late January/early February. Producer Han Hills is hard at work on this at the minute and I can’t wait until it’s released as he is doing some phenomenal work on it.

After that my third book, Tormented, will be released in late Feb/early March. The book is written and I’m currently going through a final edit. It’s booked in with the editor at the start of February. This one is more in keeping with Horror in the Woods in the fast-paced, gory horror genre – and I think I’ve surpassed Horror in the Woods in the gross-out stakes. There is one seen in particular that is pretty nasty!

After this, I will be rolling onto my fourth book, which will be more of a supernatural/suspense story more in line with The Demonic. I have a few ideas for the story, but it needs fully plotting and fleshing out. I’m hoping to get this out in May.

Then I will put two more books out after that, one a fast-paced gore-fest and the other, again, more of a spooky, creepy story. That will give me three stories in similar fields to build on. I have a feeling the ghost story/haunted house tales will sell better, but I don’t plan on stopping putting out the edge-of-your-seat style books either as I really enjoy writing them as well and they are a nice change of pace.

I will put out print versions of all books about a month after the ebook releases (or less) and also the audio versions will follow as soon as they can (depending on Han’s schedule).

And in amongst all this, I hope to have a short horror story anthology out as well!

So that will mean that by the end of 2018 I will have 6 or 7 ebooks out (depending on if I can fit the anthology in) and all in print version as well, with most available in audio.

If that is the case then I’m hoping the results will be much better than 2017. For one I will have four or five more books out and also I will have a full twelve months to go at, instead of eight. With this in mind I’m hoping to achieve the following:

I have no idea if these are realistic or not, and for all I know they might be low, but if at the end of 2018 I hit these numbers, or close to them, I will be very happy.

I also plan on giving my website an overhaul at some point but will keep up with the blogging as I really enjoy it.

And then in 2019, I plan on putting out my first series, but I’ll give more information on that in the coming months. It’s something I’m pretty excited about.

I hope you all stick with me and enjoy the books that are coming and that 2018 is a fantastic year for us all!